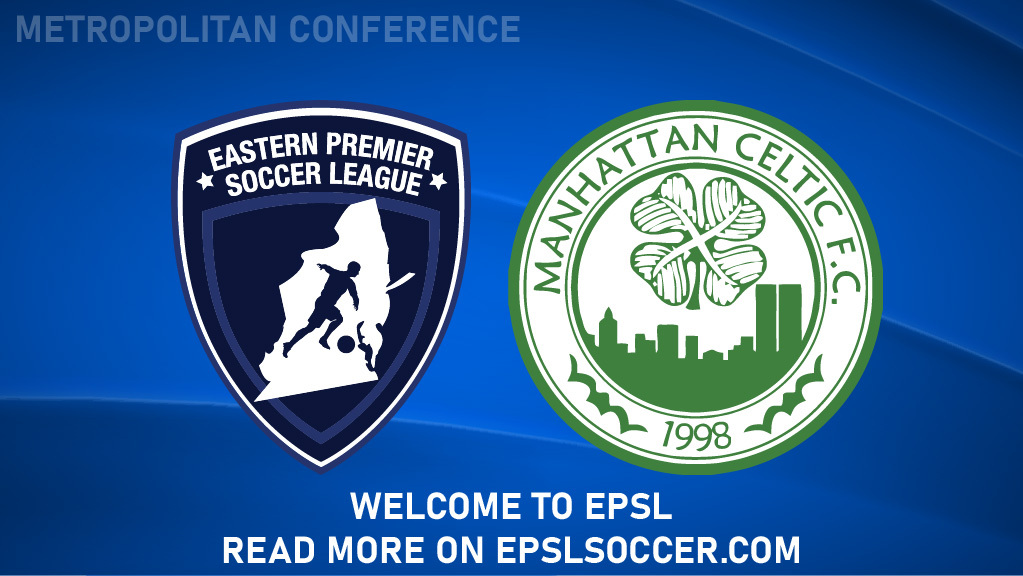 New York, New York – August 5th, 2021 - The Eastern Premier Soccer League (EPSL) is elated to announce that Manhattan Celtic will be the first team to join the EPSL from a feeder league. The Celtic enter the EPSL through promotion from the historically known Cosmopolitan Soccer League based in New York. Founded in 1998 by international players from different nations around the world including current Chairman Ian Woodcock, Manhattan Celtic earned a hard-earned promotion within the Cosmopolitan Soccer League reaching the first division in just 10 years. It is to be noted that the CSL is a founding member of the Eastern Premier Soccer League, as most CSL 1st division clubs end up joining the EPSL's Metropolitan Conference. The Manhattan Celtic will add a lot of excitement to the Metropolitan Conference.

In a phone conference the coach of the club Matt Kane told us that he is looking forward to joining the EPSL for the upcoming fall season. He went on to add “This gives us Manhattan Celtic an opportunity to go up a level as we continue to strive to become a bigger club”. He added that the club had been waiting for a chance to show how well organized its grass roots system has been for many years. “We are ready for more challenges, and it was with that in mind that we were able to work hard to be promoted to a very likeminded league that will allow us to grow even further”. The Cosmopolitan League long tradition with very diverse nationalities has helped it earn a lot of notoriety. The league was launched as the German American Soccer League by five clubs in the year 1923. Since then, for decades the league has evolved into a truly cosmopolitan refection of the New York metropolitan area’s demographics. Clubs in the CSL represent the spectrum in ethnicity. It brings a high level of enthusiasm for the beautiful game. The Manhattan Celtic is a classic example and will bring a lot to the EPSL. The league is excited to have Manhattan Celtics join in the upcoming fall season 2021-22. The entire board member of the EPSL is very excited to see the promotion and addition of Manhattan Celtic.

EPSL Communications Director Mike Seium expressed how important this move is for the team and the league alike “This is a historic moment for the EPSL but even more it continues to have an impact towards the growth of the beautiful game in this country”. He went on to add “For many clubs around the east coast and eventually nationwide, there will be opportunities to challenge top clubs including professional ones, by gradually growing and making progress. This clearly shows that if clubs are organized and have a vision, the sky is the limit.”

The Manhattan Celtic will be competing starting this fall in the Metropolitan conference of the EPSL. The team finished in second place this past season by only 1 point behind the NY Shamrock SC. The EPSL welcomes the Manhattan Celtics.

The CSL, GSSL, NECL, and MMSL have produced US Open Cup and National Amateur champions and have some of the top amateur teams in the United States so reaching agreements with these elite leagues are an exciting milestone in the history of US Soccer.

The EPSL is also an affiliate of the National Independent Soccer Association (NISA) and EPSL clubs will earn the right to compete in the NISA Independent Cup against NISA professional clubs. EPSL clubs are also affiliated with the US Soccer Federation (USSF) and the United States Adult Soccer Association (USASA), through their state associations and, as such, will be eligible to participate in the Lamar Hunt US Open Cup qualifying rounds, the US National Amateur Cup and state and regional cup competitions.

More information about EPSL can be found at epslsoccer.com or on the league’s social media platforms.